This wiki is centered on Alfabusa's Warhammer 40,000 parody series If The Emperor Had a Text-To-Speech Device. This wiki helps keep track of the show and where it intersects and deviates from official Warhammer 40,000 canon, as well as the many characters and episodes within the series. Each article is made with people unfamiliar with Warhammer lore in mind, and fills in the gaps that the story might not otherwise have. This wiki also catalogs the many contributions of the show's cast in one easily accessible place. 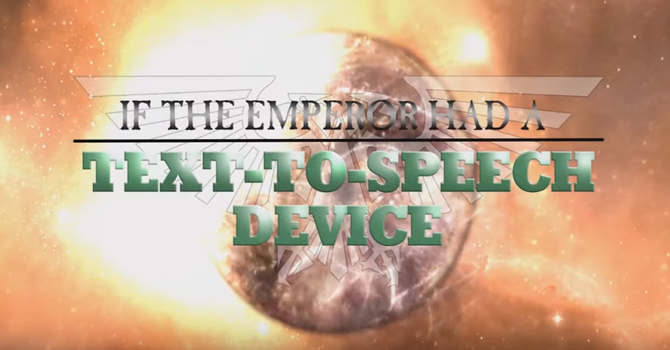 If The Emperor Had a Text-To-Speech Device

Click here to learn more about the web animation series.

Meet the Emperor of Mankind, the most powerful person in the galaxy, and a jerk.

Ever ready to serve his Emperor, Kitten oftentimes gets more than he bargains for.

Once a slave to Chaos, Magnus returns to the Imperium to redeem himself.

Check here for show-related content according to the following categories:

New to the Wiki?

Community content is available under CC-BY-SA unless otherwise noted.
Advertisement