If The Emperor Had a Text-To-Speech Device Wiki
Register
Don't have an account?
Sign In
Advertisement
in: Characters, Imperial, Adeptus Custodes,
and 2 more

"I am demonstrating to you the TRUE POWER OF THE IMPERIUM, THROUGH THE USE OF SMALL FLUFFY ANIMALS!"[1]

"Little Kitten" (also known as just Kitten) is the nickname of the Captain-General of the Adeptus Custodes. His true name is not said on screen, as it is an extremely long string of names derived from his various accomplishments.[2] He is the deuteragonist (recent episodes have truly solidified it, giving him his own adventures) and appears alongside the Emperor for most of the series.

Kitten's origins are unknown, other than that he was grown in a tube under Mount Everest (whom he calls "Mum Everest")[3], but what is known is that prior to his election to Captain-General and personal caretaker of the Emperor, he was the one who brought Alicia Dominica to the Emperor's throne room during the Age of Apostasy, in order to convince her that her master Goge Vandire needed to be stopped.[4]

At an unknown date, he became romantically involved with the Tau commander O'Shaserra "Shadowsun" but she dumped him, which left him spiteful and heartbroken[5][6][7]. Kitten insists that no such thing actually occurred, and that the relationship was "NOT FUCKING CANON", but no one ever believes him. Episode 27 has confirmed that the relationship IS canon due Lockwarden telling him that he can't keep going to the palace vaults to cry about breaking up with Shadowsun

Kitten frequently faces abuse from the Emperor, who hurls out a string of insults at every opportunity. Such insults include "golden banana," and "lipstick-looking brotherfucker." Despite this, Kitten's loyalty to the Emperor is very strong, and was responsible for giving the Emperor the Text-To-Speech device in the first place.[8] As a Custodes, he sees the Emperor as his father figure, having been created by him. Since then he's been faithfully informing the Emperor of everything that has transpired since his internment, as well as carrying out new orders.

The one order he's been reluctant to carry out is cutting off Roboute Guilliman's life support, which prompted the Emperor to challenge Kitten to a Children's Card Game. After playing a number of overpowered cards, Kitten manages to outwit the Emperor with a technicality and win the game.[9]

He was also apparently the victim of his fellow Custodes' shenanigans, particularly those of Karstodes, Custodisi, and Wamuudes, even in spite of his position. He nearly became as insane as they were, having gone through a phase where he too would run around without his armor on.[10]

Kitten came to the aid of the High Lords during Karamazov's rampage, stating that he too was a High Lord; Kitten told him that his actions were going against the Emperor's will, declaring publicly that the Emperor was back in charge of the Imperium. Refusing to believe him, Karamazov declared the Custodes to be heretics. Kitten was about to order Karamazov to be executed, when the voice of the Emperor intervened and told him to let Karamazov run away.[11]

After trying to stop a freaked-out Magnus from destroying the Emperor's throne room, Kitten made a deal with the other Custodes to give up his position as personal caretaker in exchange for their help. While they failed and Kaldor Draigo instead helped stop Magnus, Kitten still had to honor their agreement, and left the palace in remorse. Magnus tricked Kitten into thinking that the Emperor didn't want him around anyway, which devastated him.[12] However, his loyalty to the Emperor proved too strong to sway him towards Chaos. Magnus backpedaled, suggesting instead that they should try to fix the Imperium on their own, as it was clear that their father's sanity wasn't in good shape. Reluctantly, Kitten joined Magnus.[2]

On the voyage to Nocturne, Kitten proved his decisiveness once again when Tzeentch appeared to try to take back Magnus' soul. Recalling the fact that Tzeentch also plays Paradox-Billiards-Vostroyan-Roulette-Forth Dimensional-Hypercube-Chess-Strip poker, Kitten thus challenged him to a game for Magnus' soul. Despite Tzeentch's attempts at cheating, Kitten once again defeated his opponent by believing in the Spleen of the Cards. Despite this, his armor had become silver instead of gold, much to his chagrin and distaste.[1] His misadventures continued on Nocturne and the ride back to the Imperial Palace, where Magnus had him disguise himself as Chapter Master Retinens the Hero of the Crimson Tigers. In this disguise, they baited the Alfa Legion into a trap by kidnapping their Spiritual Leiges, the Blood Ravens captains Diomedes and Boreale. After capturing the souls of the Alfa Legion, Kitten was left to take care of the the two captains on his own, which mostly involved playing Call of Duty.[13]

When Kitten and Magnus arrived at Nocturne to steal the Engine of Woes, they discovered Vulkan still alive, having regenerated after the War of the Beast. Vulkan is enthusiastic upon seeing Magnus and proceeded to hug him tightly, so much so that it hurt Magnus's spine and in a rage, Magnus accidentally killed Vulkan by telekinetically throwing the Engine of Woes at him. Much to the shock on Kitten and Magnus, The Engine of Woes opened and revealed Corvus Corax inside, also still alive. When the Salamanders discover the scene, Magnus immediately teleports back to the Imperial Palace with Kitten, Boreale and Diomedes.

Kitten's arguments with Magnus became more frequent, but he was convinced to go on one last errand to find the Proteus Protocol on Mars, and use it to resurrect the Emperor. Donning his Captain-General's armour (which he normally doesn't wear as it's two sizes larger than him), he recruited several Custodes, including Hammurabi Unferth, the Lockwarden, and Santodes.[14] He and his shield company were ambushed by Cawl while in their transport vehicle and almost completely destroyed, but were saved by the arrival of the Lockwarden and Santodes. While standing over a mechanicus war suit, it exploded, killing Kitten and causing the emperor to cry out in sadness and pain.

Kitten is very mild-mannered for a Custodes, being very polite and concientious as opposed to the typically stoic and dour demeanor associated with Custodes from the official canon. He will cheerfully greet the Emperor in the morning with a fresh cup of tea before getting blasted by a psychic lightning bolt, as is often the case.[15] Kitten is also quite intelligent, as his fellow Custodes suspected that he spent a significant amount of time studying in the Black Library.[16]

While normally calm and cheerful, there have been times when Kitten's composure has cracked. In particular, he loathes the Tau, claiming that they are an especially disgraceful xenos race for various reasons. The Emperor suspects, however, that the real reason Kitten hates the Tau is because Commander Shadowsun broke up with him.[17] Kitten had been quite depressed after the break-up and spent much time in the palace vaults with the Lockwarden, a fact that he doesn't want brought up again.[14] After Magnus suggested that they should adopt Tau-like stratagems, Kitten became enraged and started screaming in cockney.[3]

He also acts obsessive when Magnus told Kitten that he knew how to resurrect the Emperor, completely forgetting how he was angry with Magnus earlier.[14]

Kitten may in fact be a masochist, because when threatening to send Kitten off to the Blood Games to face the companions and "their throbbing Guardian Spears," the Emperor knew that Kitten secretly enjoyed his threats.[18] He also couldn't deny that he had fantasies about "big, exotic crust-covered men come to take you away to the lands of a thousand volcano cannons exploding in your face."[19]

Kitten acts like a mother hen at times, especially around Magnus. Kitten treats Apollo Diomedes and Indrick Boreale as his children, acting defensively when Magnus yells at them or puts them in time-out. [20]

With the exception of The Fabulous Custodes, he is practically adored by the rest of the Adeptus Custodes.

As a Custodes, Kitten possesses various super human physical attributes as a result of extensive genetical engineering from the Emperor himself. Supposedly, he enjoys Superhuman attributes like strength, speed and reflexes. Having studied in the arts of war while the other Custodes were oiling their abs, he is expected to be a superb military combatant mixed with strategical insight.

Kitten without his armour, art by Inkary 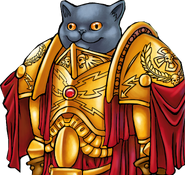 Kitten during his duel with Tzeentch,(Again?) art by Adeptus Adamaris

Kitten's original artwork (Hands of the Emperor by Sam Wood)

Kitten wearing his Captain-General armor (with feather from Magnus)

Community content is available under CC-BY-SA unless otherwise noted.
Advertisement