"I DID IT! I am the mightiest psyker in the galaxy! I am the STRONGEST! Suck it Leman, you furry fuck!"[1]

Magnus the Red is the Primarch of the Thousand Sons, and fifteenth son of the Emperor. He is the tritagonist in If The Emperor Had a Text-To-Speech Device from season 2 onwards.

Magnus the Red was found on Prospero, a planet full of psykers that sought knowledge and control over their own powers. Magnus quickly rose among their ranks, turning Prospero into the foremost authority on psykers. Eventually, he discovered the psychic presence of the Emperor, who came to Magnus and revealed the purpose of his existance. However, the Emperor warned him not to delve too deeply into the treacherous warp.

During the Great Crusade, Magnus was always an outsider, as he was hated by many of his brothers for being a psyker, most of all from Leman Russ. The only brother he got along with was Jaghatai Khan, who became his best friend. Jaghatai would've come to Magnus' defense at the Council of Nikea, but was detained through Horus' machinations. In the end, the Emperor himself decreed a ban on use of psychic powers in the legions, so as to protect them from corruption by Chaos, though he had yet to reveal its existence.

Bitter at the censure, Magnus continued to explore the warp, when he encountered Tzeentch, who told him of Horus' imminent betrayal of the Imperium. In a desperate bid to warn the Emperor, Magnus attempted to send a psychic message personally, only to end up destroying the Webway of Mankind and creating a massive portal for daemons to invade Terra. Realizing his error, Magnus waited on Prospero for the Emperor to arrest him.

Again, Horus' schemes went into effect. He told Leman Russ that the Emperor wanted Magnus dead and Prospero destroyed, to which he obliged. While Magnus and his legion escaped, Magnus never forgave his brother for destroying his homeworld, and was forced to throw in his lot with the traitor legions out of desperation. Magnus was now forever bound to Tzeentch and became his champion, one of the daemon primarchs to survive the Horus Heresy. He has remained largely inactive until the closing years of the 41st millennium.

The Emperor loudly complained to Kitten that everything that transpired during the Horus Heresy was Magnus' fault, as had he not destroyed the Webway gate, the Emperor wouldn't be forced to sit on the Golden Throne to keep Terra from being swallowed up by the Warp. Out of a desire to spank him "until his ass made his face look pale," the Emperor ordered the Ultramarines to retrieve Magnus from the Planet of the Sorcerers.[2] And to spite the Ultramarines, he had them do it without their Gellar fields on. Thanks to his plot armor, Cato Sicarius succeeds with minimal casualties, and delivers Magnus in a ceramite box covered in psychic blanks.[1]

Upon opening the box, Magnus burst forth, still furious from his capture. Seeing his father, Magnus became even more indignant, having blamed the Emperor for the destruction of Prospero and for his lack of support and good parenting during the Crusade. The Emperor countered that Horus and Tzeentch manipulated Magnus into joining the traitors, and more importantly, that the Emperor would free Magnus' soul from Tzeentch and give him a chance to redeem himself.[1]

Magnus still didn't fully trust the Emperor, but so long as he was going to fix the Imperium, Magnus was willing to assist. [3]Working alongside Kitten, Magnus was largely confined to the palace, until Karamazov's forces broke in and discovered Magnus there.[4] While the Emperor was busy feeding Karamazov's delusions of grandeur for laughs, Magnus casually cast the vast majority of the Inquisition into the warp. While impressed that the Emperor planned on eliminating the worst parts of the Inquisition in a single stroke, he was upset that he would get the blame for it.[5]

Some of the Emperor's names for Magnus include "Magnus the Bookworm," "Daemonic good-for-nothing bookbanger," "horntits," "Rose-tinted typewriter with a fucking mouth," and "My little Magny-magic."

Still angry at Leman Russ and his Space Wolves for destroying Prospero, Magnus will turn into a neckbearded cyclops at the mere mention of them.[6] This form is based on his appearance from the specialist game Epic, which deviates significantly from his more modern daemon Primarch appearance.

Magnus' relationship with his father became strained once again due to their constant arguments over how to handle Chaos, with the Emperor's offhanded quip about "screwing everything up like last time" finally pushing him over the edge. Magnus managed to corner Kitten after losing his position as personal caretaker, and lied to him that the Emperor didn't want him anymore.[7] Unable to sway Kitten's loyalty, however, he convinced him that Kitten would better serve the Emperor by joining him. After failing to kill the High Lords, Magnus brought Kitten with him to find the Engine of Woes on Nocturne.[8]

During the voyage, Magnus and Kitten passed the time by playing with a Oujia board. When a spirit claiming to be Magnus' "Adoptive Parent" came forth, it was revealed to be Tzeentch, eager to steal back Magnus soul now that he was no longer under the protection of the Imperial Palace. Like an abusive stepfather, Tzeentch threatened to keep Magnus under permanent house arrest and turned him into his "Bird Magnus" form "to boost model sales." It was only by Kitten's intervention that Magnus was saved, as he challenged the Architect of Fate to a Children's Card Game. Magnus revealed that Tzeentch couldn't actually see the future but could read thoughts, and cheated at every opportunity. Magnus used his psychic might to distract Tzeentch long enough for Kitten to defeat him. However, Magnus could no longer return to his human form, much to his embarrassment. Magnus offhandedly remarks that he prefers playing Magic: The Gathering and uses a Red/Blue deck.[9]

Upon reaching Nocturne, Magnus was about to steal the Engine of Woes, until he and Kitten ran into Magnus' brother Vulkan, who showed no anger towards his traitorous brother. Vulkan wanted to give Magnus a bone-crushing hug, which, due to Leman Russ having previously broken his back, caused him immense pain. In his agony, Magnus accidentally threw the Engine of Woes at Vulkan, temporarily killing him. Corvus Corax, who had been imprisoned in the Engine of Woes by Vulkan, appeared to chastise Magnus, as did the rest of the Salamanders, causing Magnus and Kitten to flee back to the Imperial Palace in panic.[10] On their way back, they briefly stopped so that Magnus could kill and steal the souls of the Alfa Legion to put them to future use in his plans.[11]

Upon returning to Terra, after a brief argument, Magnus sends Kitten to Mars to find the Proteus Protocol as part of his plan to resurrect the Emperor. Magnus attached one of his feathers to Kitten, allowing him to summon “Mini-Magnus” in case he ran into trouble or had to be sent home. Meanwhile, he goes to the throne room to explain his absence; originally intending to cover up his accidental murder of Vulkan and hide his plans, Magnus was eventually forced to tell the truth when the Emperor revealed that he knew Magnus had manipulated Kitten into doing his bidding. The Emperor also made many chicken-related puns at Magnus' expense, just like he predicted.[12]

Intelligence and argumentative in equal measure. Magnus the Red is very proud of his intelligence and is often highlighting this to others, although this arrogance is subtle and only comes to the surface when he is questioned, often launching into elongated debates to defend his beliefs. Still when he is proven wrong he seems to develop a case of depression and will be seen sulking as he left the area, although this is often only temporary, as with the case with his desire to present the Tau as beneficial to the Imperium he left only to return with further evidence. Though in spite of this Magnus the red has proven to be one of the most intelligent characters in the series, being able to argue with the Emperor and even dupe Kitten into following and supporting him. Indeed such an act also speaks to his skill at deception and moreover charisma.

Due to his aforementioned arrogance and stern belief in his own superior intelligence, Magnus becomes incredibly emotional when faced with a situation he does not fully understand, with the Emperor even mentioning Magnus had cried the last time he had seen him confused. This is seen again when during his reunion with Vulkan, with Magnus becoming increasingly infuriated with the notion that Vulkan's return was directly and inexplicably tied to the return of his nine artifacts, as well as Vulkan's own poorly explanation of his return. He is extremely insistent on always being right, claiming that "being right is always relevant," even when it gets him stuck on ridiculous tangent.

Magnus enjoys the occasional traditional game, having mentioned his Magic Red/Blue deck[9], as well as being the Games Master for a session of Warhammer Fantasy roleplay. Despite the players derailing his campaign almost immediately due to their incompetence, Magnus tries to railroad the characters back into a somewhat reasonable adventure, even offering them a chance to escape an impossible fight and start over. When he's finally fed up with their unruliness and stupidity, Magnus vows to kill off their characters through the Gorger Lord, but is shocked when they manage to get incredibly lucky and defeat him. In frustration, he destroys the game book, causing the surviving player characters to appear in the throne room.[13]

Magnus however does seem to be genuine in his desire to repent. His willingness to stand up to Tzeentch is indicative of this, as is his joy at receiving a bike from his father. The greatest example of this is while Magnus does often insult Kitten and did lie to him to get him to work with him, he does show genuine affection towards Kitten, wanting to play video games and card games with him. Even so he does seem to rather play his games with him.

Word to the wise though, Magnus is set into a blind rage at the merest mention of the Space Wolves, due to their part in the burning of Prospero. Indeed this hatred for Leman Russ and the Space Wolves has lead to him being manipulated a few times, such as when Tzeentch used it to convince him to break down the Emperors psychic barriers. This also speaks to an inferiority complex and a desire to prove he is better than Russ who he felt gained undue praise that he deserved. This inferiority complex also stems to his father slightly as his desire to 'Make the Imperium Great again' is to show up the Emperor to "knock down his pride." Although Magnus does often justify this dislike for the Emperor, by pointing out instances when he has been a poor parent. He is extremely reluctant to reveal his plans to his father as he wanted full credit for resurrecting him and saving the Imperium, seeing it as his best chance to get his father to finally appreciate him.

Magnus turns into a bizarre parody of Steve Irwin when in proximity to Crotalids (which are bizarre crocodilian creatures that can apparently Warp travel), though this could have been a Warp-induced hallucination.[14] 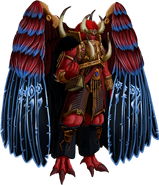 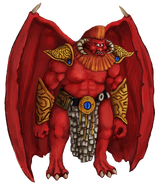 Magnus' angry cutout
Add a photo to this gallery

Retrieved from "https://if-the-emperor-had-a-texttospeech-device.fandom.com/wiki/Magnus_the_Red?oldid=4298"
Community content is available under CC-BY-SA unless otherwise noted.