"Insult my mustache's honor again and I will DRINK FROM YOUR SKULL."[1]

From a young age, Mogul Kamir sought conquest, beginning with his own tribe after killing his uncle in single combat. By the time he was sixteen, he had already conquered twenty tribes and was looking for a new challenge. The King of Khanasan told him that he would find what he was looking for by joining the Imperial Guard. Since then, he's lead the Rough Riders on some of the toughest charges against the Imperium's foes. As no normal horse could survive his tenacity, he was gifted with a cyber-horse by the Adeptus Mechanicus.

Kamir and his riders run across the survivors of the crashed ship Marbo's Glutes. While they recognized Colonel 'Iron Hand' Straken, they didn't recognize the two Primarchs Vulkan and Corvus Corax and started stabbing Vulkan with lances. However, once they were told the situation, Kamir escorted them to Khanasan to spread the warning of the impending exterminatus. After the planet was saved, Kamir pledged his forces to the Primarchs.[1] 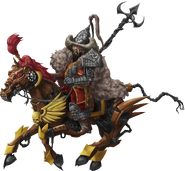 Mogul Kamir on his mechanical horse.
Add a photo to this gallery

Retrieved from "https://if-the-emperor-had-a-texttospeech-device.fandom.com/wiki/Mogul_Kamir?oldid=4046"
Community content is available under CC-BY-SA unless otherwise noted.